HISTORY OF WRESTLING
Ancient Traditions
Wrestling is one of the oldest sports, and there are many references in documents and paintings that date thousands of years ago.
From the Sumerians, to the Ancient Egypt, Ancient Greece, Middle Ages and Renaissance wrestling competitions has been a really popular among different civilisations.
In the XIX century professional wrestling emerged prior to the revival of the Modern Olympics
Sumerians
The first real traces of the development of wrestling date back to the time of the Sumerians, 5000 years ago. The Epic of Gilgamesh written in cuneiform, the sculptures and the low reliefs are numerous sources that reveal the first umpired competitions. A bronze sculpture, discovered at Khafaji, near Baghdad and nowadays on display in Baghdad Museum, shows two wrestlers grip each other by the belt Made around 2 800 B C it is the oldest representation of ritual wrestling of which we have knowledge¹.
A bronze sculpture, discovered at Khafaji, near Baghdad and now displayed in
the National Museum of Iraq, shows two wrestlers gripping each other by the belt. 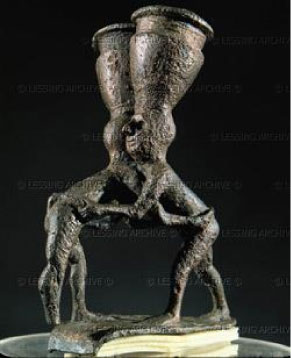 Base of a statue representing two wrestlers, Relief
of Marble, 510 B.C., National Archeological Museum, Athens.
For the Greeks, wrestling was a science and a divine art, and it represented the most important training for young men. Athletes wrestled naked, with their bodies coated with olive oil and covered with a layer of very thin sand to protect the skin from sunlight or from cold during winter. After wrestling, they scraped this layer off with an instrument called strigil and washed themselves with water. Fights were similar to those of freestyle wrestling, as shown by drawings and inscriptions from that time. The competitor who first threw his opponent or first brought him down either on his back, hips, chest, knees or elbows was proclaimed the winner.
DOWNLOAD HISTORY
Contact